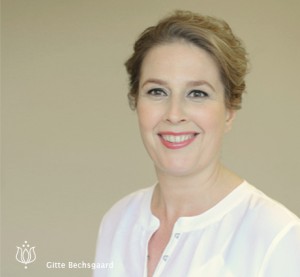 Gitte is the founder of Vidya Institute, has been practicing Yoga for twenty years and teaching for the past fifteen. She received her foundational training in Europe at the Yoga Institute of Copenhagen (currently the B.K.S Iyengar Yoga Centre Copenhagen; 1990-1997). For the last ten years she has been studying privately with Krishan Mantri in the areas of Yoga philosophy, Sanskrit, Eastern psychology, and related Vedic disciplines.
Gitte holds a degree (B.A.) in psychology from Copenhagen University and a Masters of Therapeutic Counseling from the Open International University where she also received her Ph.D. In addition, she is a graduate of the Center for Training in Psychotherapy, Toronto (CTP Dipl).
Since 2011, Gitte has been working together with Dr. Gillian McCann to organize the annual Health, healing, and religion conference in conjuction with Nipissing University. In addition, her book The Gift of Consciousness: Patañjali’s Yoga Sūtras was published in the Summer of 2013 with Cambridge Scholars Publishing.
Gitte currently works as a psychotherapist in private practice.